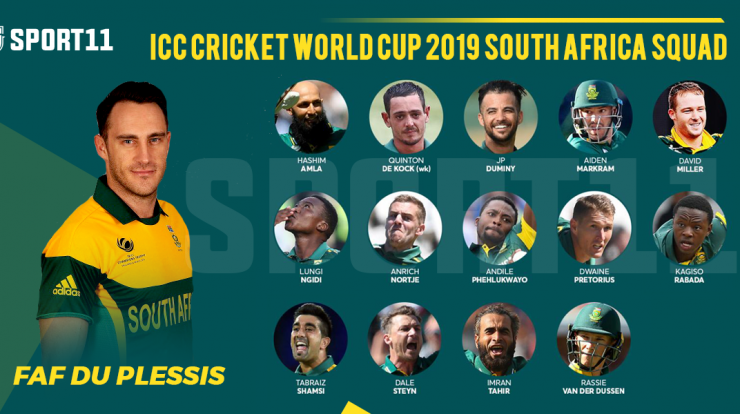 ICC World Cup 2019 is here after ending of IPL 2019 which will be played in England and Wales.

Every team is nearly ready for ICC World Cup 2019 and every team has declared players name which are going to be play in tournament. South Africa also has given the name of team members who are participating this world cup. South Africa debut in World Cup first time in 1992 and was semifinalist for four times and recently they were finalist in 2015.

South Africa will start ICC World Cup 2019 with opponent England on the opening day of tournament which will be on May 30, 2019. For the cricket lovers South Africa has selected Faf du Plessis (captain), David Miller, Hashim Amla, Rassie van der Dussen and Aiden Markram as their batsmen to win the matches in which Amla’s knowledge and experience helped him to get in the team while Reeza Hendricks and Chris Morris missed out the chance of getting in the team.

South Africa declared there 15 man squad for the ICC World Cup 2019 on 18th April. In which they took Lungi Ngidi, Kagiso Rabada, Anrich Nortje, Imran Tahir, Tabraiz Shamsi and Dale Steyn as their bowlers. After a long standing injury issues, Dale Steyn recently made a comeback to regular matches.

Newcomer Anrich Nortje was amazing in the one-day arrangement against Sri Lanka and despite the fact that he was compelled to pull back from the Indian Premier League (IPL) with shoulder damage, he is relied upon to be fit for the World Cup. There is no uncertainty that South Africa’s up and coming World Cup is broadly relied upon these experienced players. Their predictable positive exhibitions can energize the South African side which can assist them with achieving their best-ever World Cup result.

With that they have All-rounder Andile Phehlukwayo, Dwaine Pretorius and Jean-Paul Duminy in the team for pace bowling and strong batting in hard situations. But as said above lack of inexperience players in the team can be a little barrier in the team.

Because of ABD’s retirement South Africa is right now in a place where they struggle for the correct combination. They have select Quinton de Kock for the Wicket-keeping. South Africa hasn’t selected any other special Wicket-keeper other than Quinton de Kock, but will depend on for short time period on David Miller, who has done wicket keeping in recent time 5-0 series against Shri Lanka.

In All South Africa is ready to compete with every team and will give a tough competition.